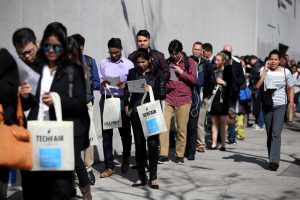 Though the U.S. economy is doing well, the partial shutdown going on in the federal government may have an adverse effect on consumer confidence and on business.

Consumer spending has gone down with less money power in hands of the people.

The country is seeing some positive data flowing in. State unemployment benefits have shown decreasing initial claims. According to forecast by Reuters, claims last week were expected to increase to 220,000. They have decreased by 3,000.

On Thursday, factory activity has increased from its two-and-a-half-year low with new orders flowing in, showing that the manufacturing sector was steady.

However, the economy is showing signs of gradual slippage, which may have long-term implications.

About 800,000 workers from the government have missed their paycheck on Friday with their partial shutdown. The shutdown which began on Dec. 22, President Trump has demanded Congress to give $5.7 billion to help build a country border wall separating Mexico.

About 380,000 government workers have been furloughed while some are working without any pay. For the month of January, the payroll employment may take a dive as the furloughed workers will be counted as unemployed. If the Trump administrations get paid salaries retroactively, its effect will be less on the January payrolls.

Many government agencies with private contractors have been working without pay. Many industries earn less as people do not have enough for daily spending, for groceries and haircuts.

Though the manufacturing sector is showing a modest rebound in areas like Southern New Jersey, eastern Pennsylvania, and Delaware, activity level has come down comparatively from the two previous years.

However, critical data that show signs of trouble are not released by the government, due to the shutdown. However, the Labor Department will reveal actual data when the next job report is released on Feb 1. Incomplete data is not providing a clear indication of the actual impact on the economy.