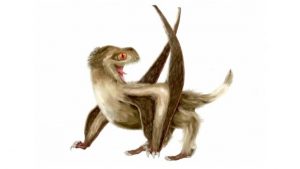 Recently, an international team of a few paleontologists, some of which are from the University of Bristol, has just discovered that the pterosaurs, and flying reptiles, have had nearly four kinds of feathers, which are also shared with the dinosaurs. This discovery has changed many things by pushing back the origin of feathers by nearly 70 million years, which is remarkable in so many ways.

The Pterosaurs are basically the flying reptiles which lived side by side with the dinosaurs, and that too, 230 to some 66 million years ago, approximately. IT has been already known that the species had some furry covering which is also called as pycnofibres, and it was also presumed that these were quite different from those which the birds have had.

But recently, in one of the latest works that was published in the journal Nature Ecology and Evolution, a team of researchers from different regions including Cork, Beijing, Dublin, and Nanjing, showed that these had nearly four types of different feathers, thus making huge changes at how we looked at the same.

These four types of feathers include the simple filaments, down feathers, bundles of filaments, and the filaments that have a tuft hallway down. These are now known for two types of the dinosaurs, which include the ornithischians and the theropods.

The armored dinosaurs however, did not seem to have these feathers, and they are said to be suppressed, and were prevented from growing. As far as the latest discovery is concerned, as per the Professor Benton, it has quite amazing implications, when it comes to understanding the origin of these feathers, and also for a major time, as far as the revolution of life on the land is concerned. When these arose, nearly 250 million years ago, life was still recovering from the end-Permian mass extinction.