Skip to content
HomeNewsTPP Goes Into Effect Without The US 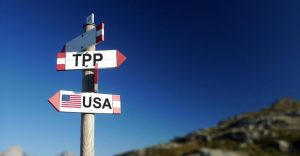 The Comprehensive and Progressive Agreement that has partners from 11 nations like Japan, Canada, Mexico, Australia and others through Trans-Pacific Partnership will not have USA among its members as President Trump stepped out of the membership in 2017. This partnership had been negotiated by Obama administration in the past to counter the influence of China on international trade and benefit the farmers of United States. The Trans-Pacific Partnership or TPP will make imports of member nations duty free within each other so while products of Canada and Australia will remain duty free products in Japan, similar products from USA will have to face tariffs.

In another deal between Japan and European Union similar relief in tariffs is being given that will become effective in 1st February. According to Vince Peterson the president of US Wheat Associates the exit from TPP will prove costly for US as competitors from Canada and Australia will be able to offer their products at competitive prices to Japan and other member nations. Instead of TPP president Trump decided to have a series of bilateral agreements with each member country directly and launch a trade war against China to bring it to the negotiation table.

Though it has led to talks between both nations after retaliatory trade tariffs were inflicted from both sides it has left US out of broad regional agreements that farmers in US had enjoyed under the TPP with other nations in the Pacific Rim region. Luckily the current signatories have left the treaty open for nations like US and China to join it in future if the terms of business are agreeable to them. Trump has successfully managed to renegotiate the North American Free Trade Agreement and got a new deal called US-Mexico-Canada Agreement that is still awaiting approval from Congress and is pursuing bilateral agreement with EU and Japan to compensate for losses suffered for exiting TPP.