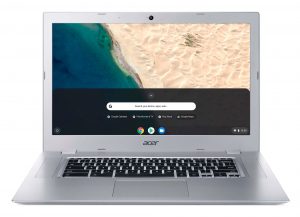 Acer and HP are conveying some new competition into the Chromebook sector with the launch of AMD chips. The 15.6-inch Acer Chromebook 315 and the newly declared Chromebook 14 by HP are the first ever to employ AMD processors—current Chromebooks are majorly dominated by Intel, and even ARM-based mobile-friendly chips made their entrance long before AMD.

Both the Acer Chromebook 315 and HP Chromebook 14 will be open for sale early this year with a new AMD A4 dual-core chip inside, with an A6 chipset alternative also accessible in some areas.

Normally, AMD’s A6 and A4 laptop processors are almost equivalent to Intel’s Celeron and Pentium series, which indicates that these are lower-end chipsets developed for power-efficient & simple devices. (HP expects 9 Hours of battery life, while Acer states it to be 10 Hours). But AMD also claims that the new 7th-gen A6-9220C AMD CPU must also be remarkably swifter as compared to the entry-level competition.

The newest HP Elite portfolio sports utmost versatility to securely create, connect, and collaborate at anytime and from anywhere, the firm claimed to the media in an interview. The latest HP EliteBook x360 1030 G3 is stated to be the smallest business convertible notebook in the world. The device is 15.8 mm thin and has a weight of 2.76 lbs. It is claimed to have a battery life worth 18 Hours. As per the firm, it is the first gadget to sport Embedded Reimaging with optional HP Sure Recover.