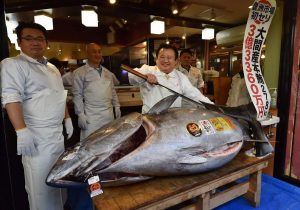 A record $3.1m has been paid by a Japanese sushi tycoon at the first predawn New Year auction in Tokyo for a giant bluefin tuna.

Kiyoshi Kimura paid the massive sum for a bluefin tuna which weighed about 278 kilograms. Bluefin tuna is a rare species. Kimura told reporters that the tuna looked very tasty and fresh to him and this eventually forced him to pay too much. Kimura runs the popular Sushi Zanmai chain. He stated that the price was higher than expected, but as per him, the customers will enjoy this excellent tuna. Since many years, Kimura has been the highest bidder. His previous record was of $1.4m for a fish in 2013.

After the auction, the fish has been sliced up at Kimura’s main restaurant. To slice this giant fish chef used special knives that resemble Japanese swords. Several sushi lovers have been queued to taste this rare fish. Reiko Yamada who is a housewife stated that this tuna is tastier than ever.

Japan is one of the largest consumers of bluefin tuna in the globe. The increase in the consumption of the Pacific bluefin tuna has alerted a possible extinction of these fishes.

The recent auction was the first sale that has happened at the new fish market in Toyosu. Previously, the market was at Tsukiji which was the biggest fish market in the world and a popular attraction for the tourist as it was packed with restaurants and shops. Tsukiji was opened in 1935 and was known for the predawn everyday sales of tuna that have been caught from different parts of the world. Toyosu, which now has the new market, is expected to attract the tourists just like Tsukiji. According to the Tokyo governor Yuriko Koike, he sincerely hopes that people will love this new market.