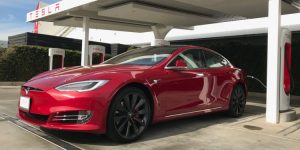 A teenager from Florida died after the Tesla sedan has crashed and burnt into flames last year. The parents of this boy sued the electric vehicle manufacturer alleging that battery pack of their Model S was defective & can catch intense fire. The parents named as Edgar Monserratt & Esperanza Martinezde Monserratt has alleged during a lawsuit filed in the Broward County Court on Tuesday that the battery of their car was not safe, which made the overall vehicle defective.

The teenager named Edgar Monserratt, age 18 was travelling in a car sitting at front has crashed in Fort Lauderdale on 8th May 2018, that has also killed driver named Barrett Riley of the same age. The other teen travelling along with them was thrown out of the car was heavily injured. The Model S sedan has taken inadequate measures for preventing such after collision fire incidents and has insufficient measures which can cause fires, says Philip Corboy, the Chicago attorney, who represents the lawsuit by the parents. He also alleged that Barrett Riley’s parents had already installed a device that limits the speed of car to 85mph after which he was charged for driving at a speed of 112mph in the month of March.

This device was mounted by the service center of Tesla which was removed later by the service center without the consent of parents, says the lawsuit. Hence the lawsuit has alleged Tesla of neglecting this fact which shows damages of about $15000. As said by the report by Board of Transportation Safety, which investigate the case of crash involving vehicles of Tesla and the fires caught, the sedan ModelS was running at a speed of 116mph three seconds prior to its crash on to the wall, which was just slowed down at 86mph after the bursting of airbags.