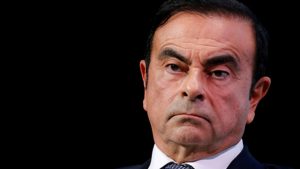 New misconduct accusations by Tokyo investigators against Nissan Chairman Carlos Ghosn are centralized on the utilization of the company funds to disburse a Saudi businessman who is supposed to have aided him out of monetary difficulties, two company sources familiar with the situation said. Prosecutors have arrested Ghosn for a third time in recent time, blaming him of exacerbated breach of trust in shifting private investment losses to the auto manufacturer. According to the prosecutors’ statement, around October 2008, Ghosn was attempting to cope with losses on paper of 1.85 Billion yen ($16.6 Million) incurred on a substitute contract he had with a bank.

A person helped in arranging a letter of credit for Ghosn and the company run by that person afterward received $14.7 Million in Nissan funds in four episodes between 2009 and 2012, the statement stated, adding that the compensations were done in that person’s and Ghosn’s interests. The prosecutors’ statement further added that by doing so, Ghosn breached trust and wreaked damage on the assets of Nissan. Reportedly, Ghosn had previously needed Nissan’s shoulder the appraisal losses directly. As per to the Nissan sources, the person who assisted Ghosn is Khaled Al-Juffali, Managing Partner and Vice Chairman of Saudi Arabia’s biggest conglomerates—E. A. Juffali and Brothers—and a member of the board at the SAMA (Saudi Arabian Monetary Authority).

On a similar note, Renault is under pressure since Carlos Ghosn stays in jail. In the last month, when Carlos Ghosn was arrested on his private jet in Japan on the charges of breaching the nation’s economic reporting laws, Nissan immediately fired him as its chairman. But the French auto manufacturer’s—Renault—the organization stuck by Ghosn, its chairman, and chief executive. But presently an intensifying storm is placing pressure on Renault’s doubtful posture.