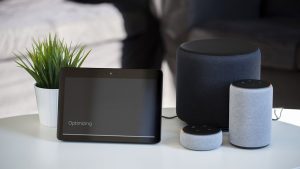 The set-top boxes, tablets, and smart speakers with the Alexa that is built in with them, actually flew off the shelves literally, in this holiday season, as per the reports obtained by the e-commerce giant Amazon. The retail giant has not broken out the exact stats yet, but it revealed that the shipments of most of the devices such as Echo Dot, Alexa Voice Remote, and others were actually up by nearly millions of units. In addition to this, the company also stated that the shoppers purchased more and more Kids Edition devices as well, as compared to before.

Although thee sales of the other devices of the company such as the Fire TV, Fire Tablet, and the Kindle products did not achieve similar feat by hitting such high records, the sales have still been quite spectacular, as the numbers were relatively higher, as compared to those from last year. Along with the aforementioned, the company played many more holiday jams this season, and the numbers were in hundreds of millions. Alexa fielded as many as tens of millions of requests to turn on the holiday lights as well, and the number one command which was given to it was about turning the Christmas tree on.

The customers seemed to have made Alexa do a lot more than what is already mentioned above. The voice assistant delivered nearly eight times as many reminders as compared to the last time, and it also set as many as a hundred million timers as well. Many of the features of the assistant were also a hit, including the step-by-step feature. The people also did plenty of shipping through the voice assistant, and the purchases literally tripled, as compared to the last year. As far as the global smartspeaker market is concerned, it would be valued at $30 billion by the year 2024.